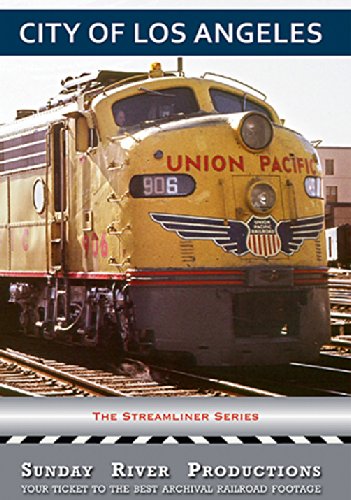 Union Pacific’s City of Los Angeles crosses the spectacular terrain between LA and Chicago, a worthy rival to the famous Santa Fe Super Chief. We start in Los Angeles under skies so clear its almost possible to touch the crystalline tips of the San Gabriel mountains from the steps of Union Station. We track the City of Los Angeles from the ground as it buckles down to ascend Cajon Pass with 5 roaring E units. The Wasatch Range in Utah and the Rockies in Wyoming follow, each of them white with winter. Leaving in early dawn from Ogden, Utah the streamliner clings to the canyon wall above the boiling Weber River. The snow deepens as it transits the Gateway and speeds accelerate to 75 mph. Just beyond Echo, with a sharp left around a 2000 foot cliff, the train starts to climb to the Aspen Tunnel in earnest and finally tops out some 3000 feet above Ogden.

The streamliner then crosses 4 hours of emptiness from Green River to Laramie sometimes at allowable speeds of 90 miles per hour. Under the black rolls of a coming storm it climbs Sherman Hill on the old line and continues down to Cheyenne, with many shots from the cab.

The beautifully photographed finale of this DVD shows another dramatic run on Sherman Hill. This was to have been the final run of UP’s 8444 in 1970 and features the engine and three passenger cars (one an ancient brass railed observation), driving into a terrible blizzard on Sherman Hill.