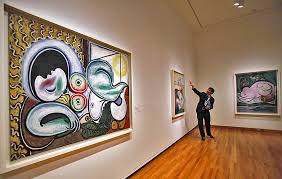 Picasso Museum Was Reopened in Paris

We celebrated his birthday on October 25th and we hear about him everywhere we go. Particularly in Spain where he was actually born and lived for a long time. Who is he?

I admit. This riddle would have been more efficient if I wouldn’t have given you the answer in the title. Yes, I am in fact talking about the crazy genius, Picasso.

What You Didn’t Know About the Picasso Museum in Paris

One of the many museums dedicated to his work was opened in 1985 and had a very scandalous life since then. Just like the artist would have liked it!

Closed in 2009 for expansion, after 5 years the Picasso Museum in Paris reopened, twice its original size and with a lot of new things to enchant its visitors.

The building of the museum is a 17th century house which is supposed to be the oldest in Montmartre. It is placed near the Lapin Agile cabaret, a lively place where Picasso used to sip absinthe and relax with the gang.

The Picasso Museum in Paris features many masterpieces, drawings, sculptures, photographs, documents, ceramics, etc. Over 5000 to be exact.  We are talking about the studies for Les Demoiselles D’Avignon, a few photos made by Dora Maar (his lover) capturing the artist working on his famous Guernica, The Two Women Running on a Beach, Bull’s Head or a portrait of Dora Maar conveyed in streaks of coral, shades of yellows and bright green.

Furthermore, fans can also encounter some of the works owned by Picasso and signed by artists he appreciated: Degas, Cézanne, Gauguin, Braque, Miró, Matisse or Henri Rousseau. These works are kept in the attic not because they have less value but because it gives them a more bohemian look.

The fee for the entrance is only 10 Euro and it’s in fact a cheap price to pay in order to explore the universe of Picasso while living in the Parisian era. He came to Paris when he was only 19 and settled in Montmartre. Probably the seductive way of life had something to do with his choice. In the 70s, his studio in Bateau Lavoir was destroyed by a fire but admirers can still visit the site on Place Emile Goudeau.

Rejuvenated, fresh and with a lot of interesting pieces to show, the Picasso Museum in Paris is the perfect choice if you are a fan. And even if you are not familiar with the artist, this museum is surely the way to go. So if you happen to be in Paris, don’t forget to pay a visit to the most exciting genius in the world of painting!