Turn Right For Japan: Cycling the Silk Road to the Orient 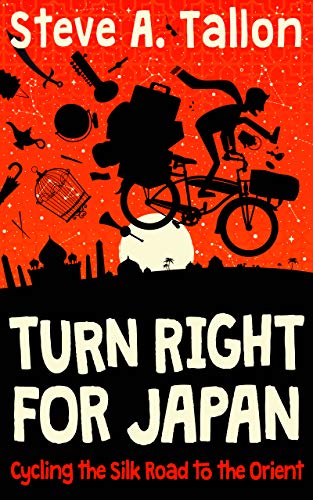 After a decade of overwork, fidgety food and a sensory overload of noise and neon, British expat Steve Tallon needed a break from Japan. So he took a world map, drew a line between London and Tokyo and wondered… could he cycle it? As he turned off his computer and rode the office elevator for the last time, little could he imagine that he would soon be squashing scorpions on the floors of Central Asian teahouses, cavorting with small time Uzbek mobsters and spending solitary, spectacular nights in the Gobi Desert under stars so bright they hurt.

With humour, humility and cringeworthy honesty, Steve presents an entertaining from-the-saddle account of faraway desert nations, leg-thrashing mountains and eye-opening conversations from a legion of colourful characters encountered along the way. In Turn Right for Japan, follow Steve as he puffs his way into fitness, confronts loneliness and constantly doubts his resolve, yet somehow arrives in Tokyo some 10,000 hard-earned miles later.

From Belgrade to Bishkek, Tabriz to Turkmenistan, fill your water bottles, saddle up and enjoy the ride!