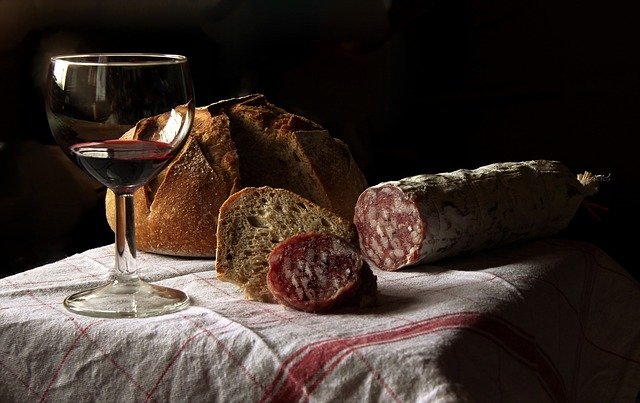 We often presume to understand restaurant economics because we know what a chicken breast costs at the supermarket. „I could make this dish at home for $5,” goes the refrain. Could we? Here, eater looks at all the costs in a popular restaurant dish to see what goes into it, and how much profit comes out.

Restaurant owners usually spend a lot of time working out how to make ends meet: how much to charge for a dish, how to choose ingredients, how to pay staff. For years that’s what owners Beverly Kim and Johnny Clark did to offer the bacon-, potato-, and scallion-stuffed bing bread at their restaurant Parachute in Chicago. Fried and baked, crispy on the outside, fluffy on the inside, the bing bread was beloved — and yielded just 63 cents per loaf sold, a 4.2 percent profit (at the very low end of the restaurant’s overall 10 percent net). It was also incredibly complicated to make (the restaurant published the 21-page method in a single recipe book co-written by Kevin Pang). But, as they reopen Parachute after a renovation and two years of takeout service, Kim and Clark are taking their signature dish off the menu, not just because of the slim margin — they want to do right by their employees too.

The owners feel the time is right to perform a major reset on staffing practices. They’re getting rid of the subminimum wage, the (legal) economic framework that supports tipping and cements foundational problems within hospitality like wage disparity between front and back of house and systemic bias against servers by customers. “We’ve inherited a broken template,” says Kim. “But we have to be careful about the new vision of how labor works. Until the consumer can understand the real cost of food and service, there’s this disconnect between what people are willing to pay for food and what we need to charge in order to have the living wages and benefits that create a sustainable environment for people.”

If Kim and Clark want to pay their workers fairly, it makes no financial sense to hold on to the bing bread. To understand why, it’s best to look at the bing bread two ways: first, based on pre-pandemic costs that yielded a 4.2 percent profit. Second, by comparing that to how much more the restaurant would have to charge in order to maintain that same slim margin, while also factoring in both the current inflation of food costs, and Parachute’s plan to raise server pay from the $9 subminimum wage to the $25 they typically make with tips.

From the time Parachute opened in 2014, the bing bread was an instant stle and a default starter for tables to share, but the food cost of $5.67 was always too high for a $15 item. The dish required so much time and space to make: After a month of training on the recipe, one full-time employee had to come early every day to produce batches of 24 orders. Even with strong overall sales, fixed costs (27 percent) and labor costs (31 percent) within advisable margins, the bing’s ingredients were 37 percent of its menu price, resulting in a 4.2 percent profit of 63 cents.

To Kim, the bing bread was not the heart of her Parachute menu, and she had plans to rotate in different Asian bread recipes like roti or milk bread. But it was a fan favorite and eventually became too emotionally important to customers to ever remove. (This is a common pitfall of successful dishes; for instance, Scaramouchea restaurant in Toronto, has tried unsuccessfully to get rid of a coconut cream pie that’s been on the menu since 1980.)

That reluctant commitment to the bread lasted through the early days of the pandemic. Over the last two years, the bing bread was available for takeout and delivery, alongside meal kits, cocktails to go, fried chicken, cross-state shipping through Goldbelly, a Korean pizza spinoff, and every other pivot the owners could think of. They increased the bing’s price to $20, but despite the $5 jump, Kim and Clark didn’t see dramatically increased profits. Labor costs also jumped to 53 percent of sales. Food costs rose too. Like many businesses, Parachute was just breaking even.

Reopening menu price: off the menu

Note: Estimates based on Parachute’s projected goal of reaching sales where labor equals 40 percent and 27 percent for fixed.

Kim and Clark opened a second restaurant, Wherewithall, for service in 2021, allowing them to renovate the 100-year-old building that housed Parachute. While the space was being massively fixed up in ways most diners wouldn’t notice (ripping up floors revealed rotted joists and 25 types of flooring), the restaurateurs decided to make more visible changes to the pricing, raising everyone’s wages to reduce the need for tips. A note on the menu indicates an additional service charge, and the point is elaborated when it comes time to pay: “A 20 percent transitional service charge has been added to all checks in order to move away from the sub-minimum wage and allow us to pay a higher hourly wage to our entire team as well as providing health care benefits. We are calling it transitional because it will take time for the restaurant industry to adjust to the true cost of food and wages.”

“Textbooks would say labor is 30 percent of sales,” says Kim. “But this is based on subminimum wage labor. I think with paying out fair labor costs, the ratio is more likely our ratio, which makes sense because hotel restaurants run similarly, as they have higher labor costs than independent restaurants.”

Minimum wage in Chicago is $15, but for tipped workers it’s $9. A living wage in the city (for someone with no children) is more than $18. Kim and Clark increased house pay from $9/hour plus tips to $25/hour, while also bumping back-of-house staff from $14-$15/hour to $17-$18 plus benefits. (At Wherewithall, this system has yielded roughly the same amount for both groups when factoring in longer hours and regular overtime for cooks.)

The changes increase the restaurant’s labor costs by 29 percent. Neither group is making a fortune. But it means raising the standard of living for cooks, while ensuring servers are still earning a living on slow nights, instead of relying on tips and the whims of customers. “Some weeks, it’s so slow because of COVID,” says Kim, “we’re losing money and going negative by paying servers $25 an hour. But it’s about building a culture that values ​​and validates people as professionals. And I think we’ve done that. We have only lost one server in the last year.” At the same time, a 20 percent service fee is effectively treated as revenue (and taxed as such, as opposed to tips, which traditionally are distributed amongst staff and not counted as revenue or as wages).

The first option for restaurateurs in this position is to find a way to make the dish less expensive to produce. If they can’t pay people less, they look to cut corners on the method or ingredients, while hoping customers won’t notice the difference in quality. They switch from one brand of flour to another, then the bacon, and the butter — until the final dish no longer resembles the cherished original. Kim and Clark weren’t willing to do that.

The next option is to raise prices. With food costs up by 15 percent, on top of the added labor costs, the restaurant would have to charge $19 for bing bread, plus the 20 percent service charge, bringing the price to $22.80, in order to generate the same 4.5 percent profit they earned before the pandemic. And to be on par with the restaurant’s overall 10 percent margin, the dish would have to be priced at $23.40 ($28 total with the service fee). „It’s hard to just charge what you need to charge when every restaurant is basing their prices on subminimum wages,” Kim says.

But raising prices is not on the table for all restaurants. At New York’s Babbo, $28 would be toward the low end for a pasta dish, which can go as high as $39 (not counting the $85 tajarin with black truffle). But thanks to well-established racial bias in menu pricing, Kim is nervous about charging more than $15 for this Asian American Korean bread no matter how much the ingredients and labor cost. (In an even stronger example, a place like Eleven Madison Park can even raise prices and re praise when they get rid of tipping — then reverse course, bring back tipping, and keep the inflated prices.) This price discrimination is “the bamboo ceiling,” she says. “Attitudes toward pricing are not a reflection of the true value of the cuisine, but of the American perception of value of the cuisine’s social and economic status.”

The only option left is to remove the bing bread altogether, which is where Kim and Clark landed. While nixing it might anger some customers, the decision was ultimately about holding on to staff. With no way to mechanize the process and the human element so hard to train, it required a sous chef (plus a dishwasher) to come in during the morning when the kitchen was empty. Working alone, that cook never really became part of the crew, so there was a high burnout rate in the position. Kim and Clark often found that it was the last station a cook had in the kitchen.

The realities of the restaurant industry don’t allow Parachute to produce bing bread in a way that serves everyone. Besides making great food, though, Kim says one of her goals is to leave the industry better than she found it. That work is not done. “We have to start somewhere to move toward a more equitable system — toward compensating everyone better,” says Kim. „If I have to make choices, like taking out the bing bread, in order to do this, then that’s what I have to do.”

Corey Mintz, a food reporter focusing on labor in restaurants, is the author of the recently published book The Next Supper: The End of Restaurants As We Knew Them, And What Comes Next (Public Affairs 2021).